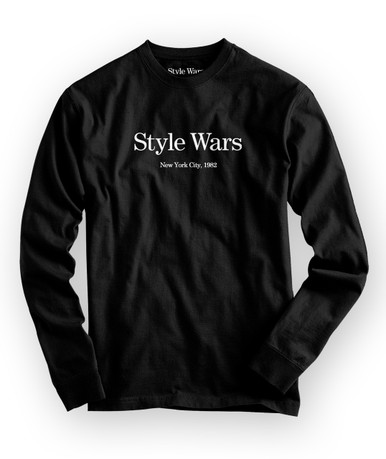 Nothing says classic Hip-Hop, like the documentary film, Style Wars. When director Tony Silver and co-producer Henry Chalfant delivered the broadcast version of their prize-winning film to PBS in 1983, the world received its first full immersion in the phenomenon that had taken over New York City. Fast forward 31 years later and Style Wars is a household name in the global culture of Hip-Hop. We are honored to team up with Style Wars co-producer and visionary Henry Chalfant to offer the exclusive Style Wars logo tee. This premium tee features the classic Style Wars logo and "New York City 1982" screen-printed at the center front, while the back of the tee features actual credits from the film, making this shirt a real collector's item. This tee has the same design on the back as the short sleeve version.

Style Wars Blu-ray Release Trailer (02:56)
Style Wars on Blu-ray. Available November 4th, 2014. Featuring a brand new HD transfer from the original 16mm print. Over 70 minutes of never before seen extras including: -The Outtakes and The B-Boy Showcase, made from unreleased footage, remastered with the help of donations from Kickstarter, also in HD. -Style Wars: In The Cutting Room, a behind the scene look at the making of the film during the final stages of the editing process. http://shop.stylewars.com/product/style-wars-blu-ray/